[On the cover: About Time landing page]

It was supposed to be the usual annual show scheduled for May with the celebrated Met Gala opening. Instead, due to Covid-19 everything was put on hold. Now the much-anticipated show ‘About Time. Fashion and Duration’ opens on the 29th of October at the Metropolitan Museum of Art in New York and will remain open until the 7th of February next year. It follows a path that unfolds over the course of a century and a half of history, from 1870 to today, and investigates the concept of “duration” as proposed by the philosopher Henri Bergson, a theorist of past-present dualism, which become one and the same in our memories.

The exhibition, which explores how clothes generate temporal associations that blend the past, present and future, is conceived as a clock, 60 minutes of fashion with 60 pieces arranged chronologically, each interrupted by a more recently created outfit, but with visual or conceptual affinities. For example, a princely suit from the late 1870s is juxtaposed with a 1995 Alexander McQueen skirt, or a mid-1890s black satin dress with huge sleeves is juxtaposed with a 2004 Comme Des Garcons outfit. 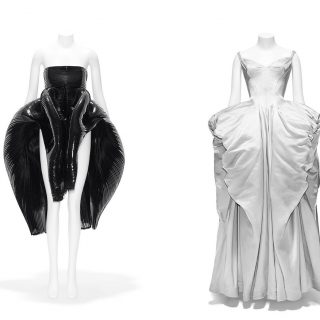