“This space is very important. It is a valuable experience for us to be here, and theMICAM has demonstrated that it has time for companies like ours that are trying to change the way the footwear market works,” says Antonio, who comes from a family that has been making shoes for three generations and has now established Lenora Scarpe di Lusso, makers of Italian-made shoes for women since 2011 in Vigevano, one of the world’s most important footwear districts. The other partner in the venture, footwear designer Dante, has a background making tango shoes, and this is obvious in the styles on display in the new Emerging Designer area set up in the Luxury hall at theMicam, only minutes away from some of the greatest and most important Italian fashion brands, such as Fendi, Ferragamo, Gucci, Prada and Tod’s.

Assocalzaturifici chair Annarita Pilotti underlines the concept by declaring that this edition of theMICAM is “special because it brings together some of the big names that have made Italian fashion great and the emerging new designers who represent its future identity“. 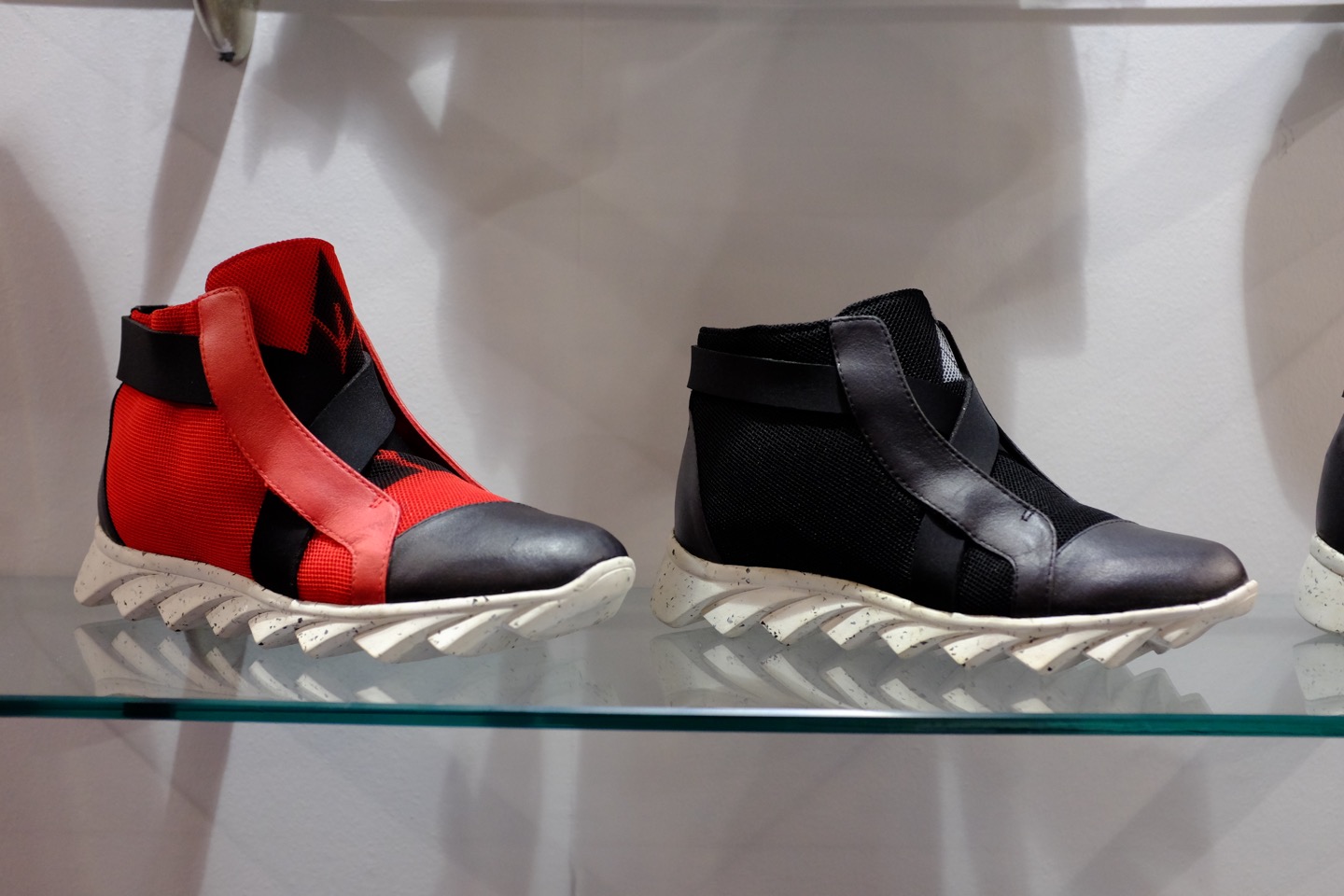 I come from a family that has always worked in the world of footwear, but I have gathered the courage to try and offer something new, though I do realise it won't be easy to get people to understand my product - Marco Zanuccoli of SQUARe027

Right next to Lenora is SQUARe027, another example of Italian creativity and courage. Its founder, Marco Zanuccoli, also comes from a family and a town where footwear is in everyone’s blood; he too has launched a new idea on the market, a line of ecological shoes made of vegan leather and recycled materials. He presents his first capsule collection and his new fall/winter 2017/18 collection at the show.

The Emerging Designers include brand now designers like Zanuccoli who are presenting their first or second collection. But there are also brands that have already carved out a niche for themselves on the market, some of which are available in stores all over the world.

And of course not all the brands are Italian: there is footwear from Portugal, like that of Manuel Dupont, a company founded by two brothers who will be presenting their first collection, which is characterised by splendid work with textures; visitors are invited to touch all the shoes while repeating “feel it, feel it” over and over; 7 Hills is another Portuguese brand which started up in the summer of 2015 and has come to Italy for the first time, with its very feminine but comfortable shoes featuring details inspired by the metal decorations on antique balcony railings. 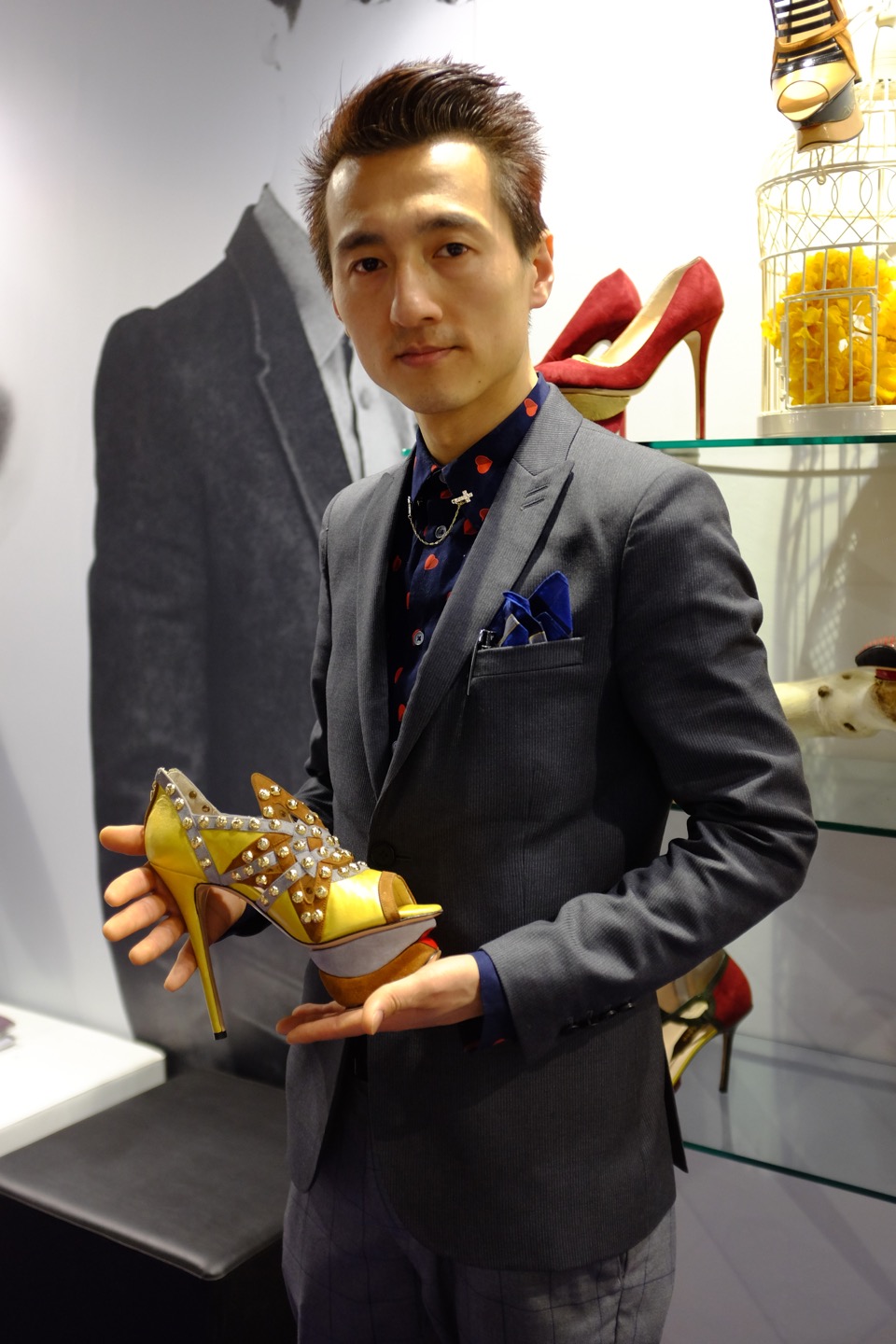 The Ponggou designer creates not only shoes, but the clothes he wears

Jimibek Milano is inspired by classic men’s fashions with a contemporary twist created by unusual details such as athletic soles or red X’s stitched onto the uppers. Designer and founder Jelmano is Korean, but studied design at Politecnico di Milano and decided to set up his business in Milan. All his shoes are strictly made in Italy; in fact, they are practically 0 km shoes, as they are made in Cormano, not far from the Madonnina.

Another designer from the Far East, Ponggou is originally from China, but based in London. His ultra-feminine shoes with their tapered shapes inspired by nature are made in the UK. Just stop and watch for a moment and you will recognise flamingos, snakes, feathers and — in a little concession to a very human sensuality — flirtatious little red lips.

Flora Harrison is a Chilean entrepreneur who also lives and works in London. After studying haute couture and gaining experience in a variety of sectors of fashion, she recently founded the brand that bears her name, making women’s shoes and bags for young, sensual, dynamic world travellers.

London is also the headquarters of Boté A Mano, the result of the love story of a young couple, Italian Edoardo and Iranian Niloufar. East and west come together in romantic shoes inspired by Persian architecture and made in Italy with Italian craftsmanship. 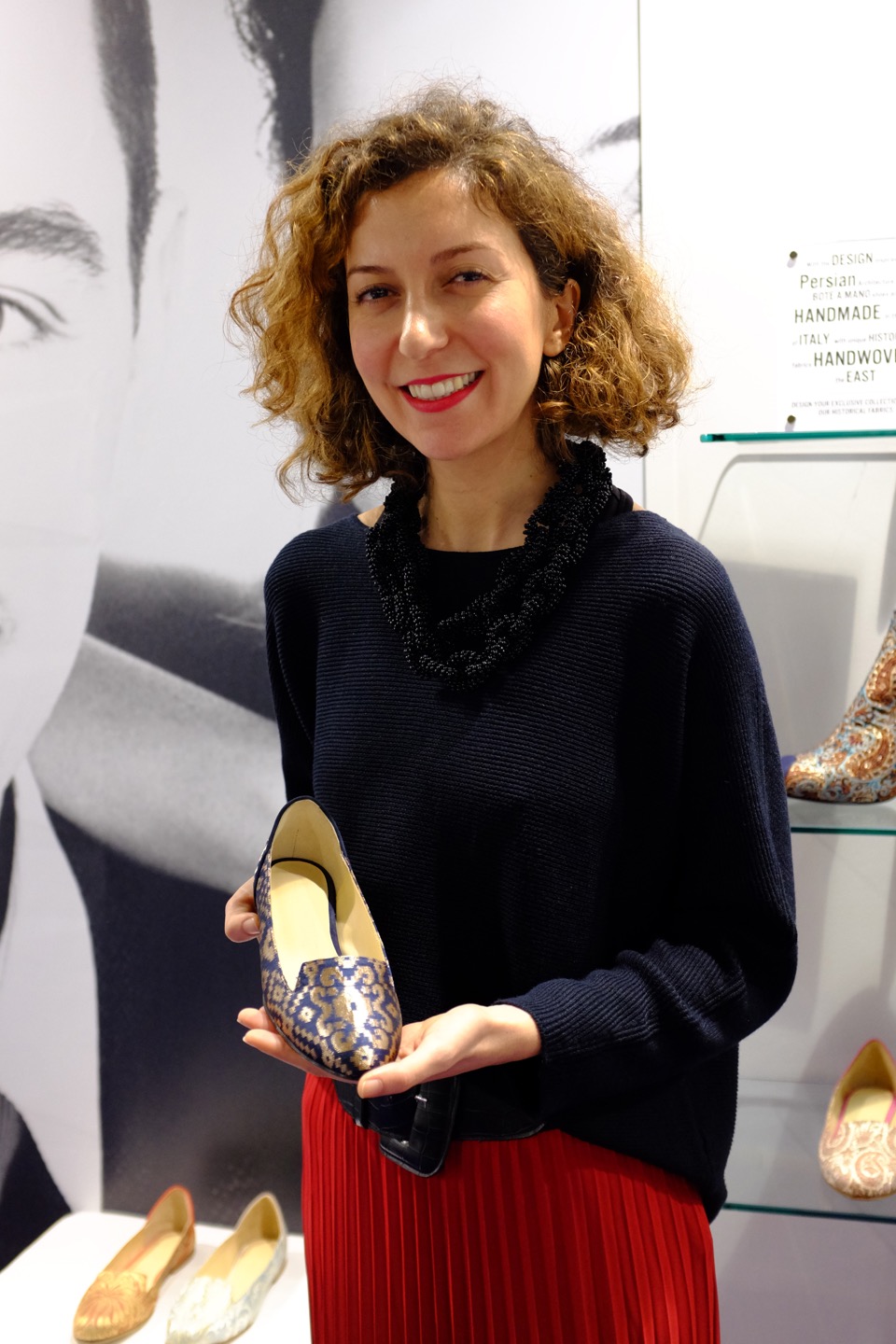 She is Iranian, her husband is Italian. They live in London and make their shoes in Italy. "Is there any other place to make top quality shoes?"

Asks Kamica Hampton, a cheerful, flashy Texan businesswoman who has made her dream of wearing her own shoes come true and launched a brand for women like her who want to be noticed, feel “naturally sexy” and refuse to settle for compromises.

Bright colours, quality leathers, ribbons, laces and high heels: all Made in Italy.

“How did you find the right company to make your shoes?” we asked her. “I looked at all the companies that were willing to make small quantities,” reports Hampton.

Ellen Verbeek agrees. She came from Belgium, and her products are characterised by a playful feminist pride, inspired by art déco architecture, and made in Italy using plenty of natural materials (including splendid wooden heels with rounded lines). 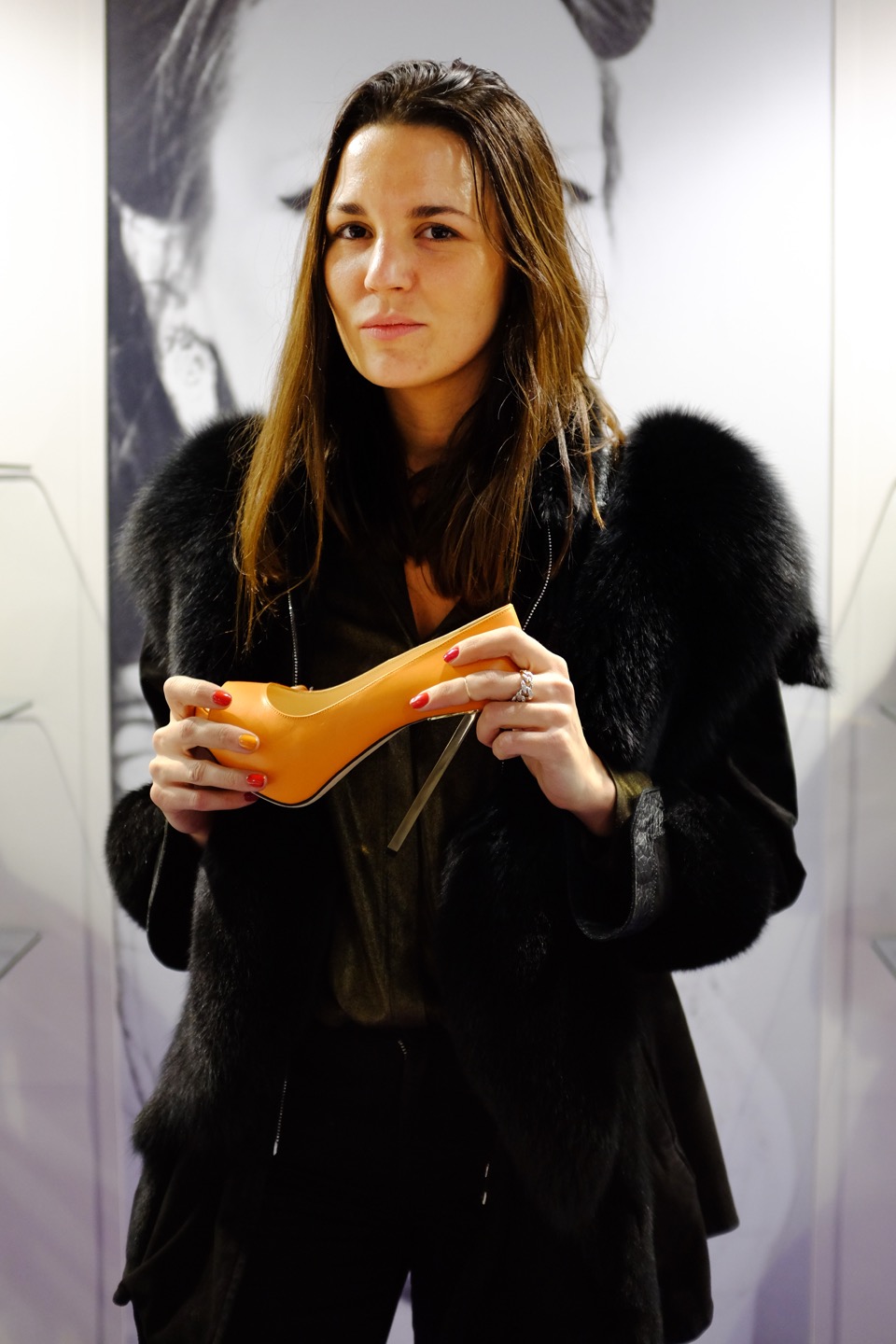 We patented one of our heels, the cross-shaped one. The pole-shaped one, on the other hand, may look easy, but in actual fact it requires a special structure, and in fact we have a boat-builder make it - Erika of Lamperti Milano

The Lamperti Milano brand selects the companies it works with in two footwear manufacturing districts, Parabiago and Porto Sant’Elpidio. Founded by Erika Lamperti and her brother Federico, the brand draws its inspiration from ancient myths and legends, and presented a new fall/winter 2017/18 collection inspired by an 18th century Chinese story called “The dream of the red room”. The story features numerous female characters, and Erika and Federico imagined shoes for several of them.

Initiatives that began among friends, or with a love story; companies established in the owners’ home country or far away; studies in fashion and shoe design or architects and economics graduates turned designers, study of tradition or innovation (or both at the same time): the little corner of theMICAM that makes its début this year under the name Emerging Designer offers but a small sample of all the changes under way in the world of fashion in general and footwear in particular.

It’s impossible not to be enthralled by it!


Warning: Invalid argument supplied for foreach() in /home/customer/www/italianshoes.com/public_html/wp-content/themes/italia-shoes/partials/layout-gallery.php on line 14
BACK TO TOP