From workers to hippies

Not everyone knows that the term sabotage, which appeared during the industrial revolution, derives from the shoes the workers – who were exploited or at risk of being fired – inserted in the machinery that was steadily replacing them in factories and offices to slow or block production.
These shoes were sabots, and thanks to etymology we have some important information about the otherwise mysterious history of these shoes which cover the foot at the front but leave the heel free.

Some theories suggest the shoe dates back to Ancient Rome. Indeed, Roman soldiers wore caligae, defined by a wooden sole, similar to the farmers’ clogs that would become commonplace in French and German speaking Europe in Medieval times, from the Netherlands and Trentino to France, the Valle d’Aosta and Belgium.

Used primarily as work shoes, sabots were never worn outside the home, farming and working environments, and they were associated with the less wealthy classes. It was the French revolutionaries who would legitimise them for “urban” use. 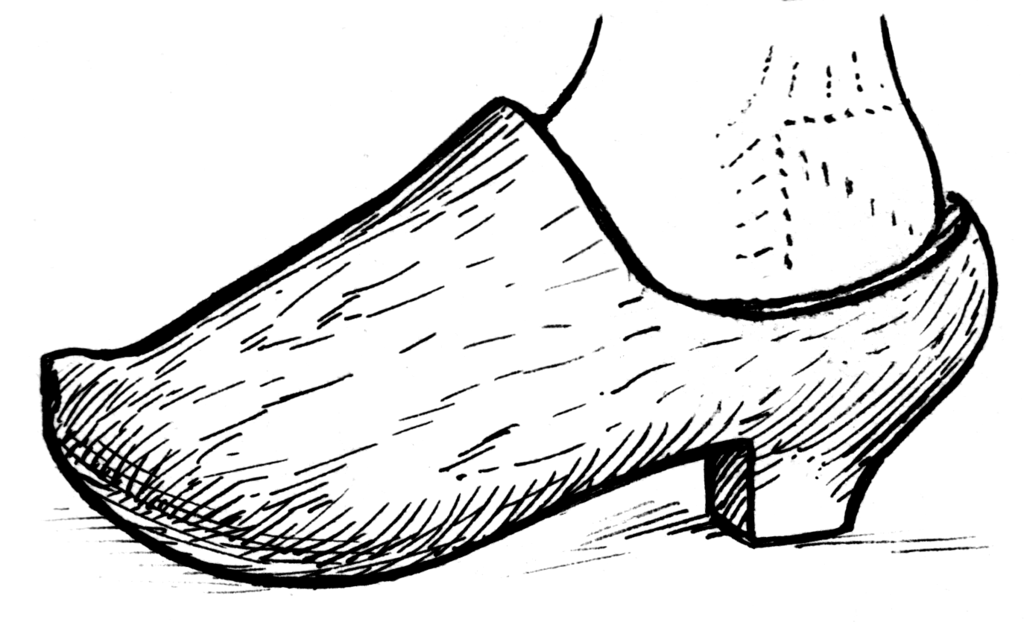 Used primarily as work shoes, sabots were never worn outside the home, farming and working environments, and they were associated with the less wealthy classes.

In the 19th and 20th centuries they became, once again, work shoes, until the 1960s and 1970s when they were adopted by hippies. From then on, the world of fashion has “incorporated” them into our collective imagination, presenting a wide variety of versions of the shoe for work (in technical or synthetic materials), free time (beach and holidays) and even evening wear.

The typical “click clock” sound of wooden clogs has even inspired a dance, the clog dance. Originating in England in the Victorian Era, it later became popular in the United States, inspiring the creation of modern tap-dancing shoes.

Classic clogs are made partially or fully out of wood.
The front part may either be open or closed, but the heel is always free. Some versions have a strap.
The sole can be low, with a heel or with a wedge.
When we think of clogs, we often think of the Dutch versions, with the point turned upwards. Swedish träskor and Japanese geta are considered local variants.
The term sabot refers to the French version of clogs.

Nowadays many types of clogs are available: rounded or squared, with or without fur, made of leather, cotton, velvet or synthetic materials.