From the dawn of history to next spring/summer's shoes

When we talk about human inventions, many things come to mind, from the wheel to the personal computer. But nobody ever mentions a very important invention, which took place well before that of the wheel and was probably even more important: the invention of thread.

It was Cro-Magnon man who, tens of thousands of years ago, discovered that two pieces of fibre could be woven together to create a longer, stronger piece. Thread could then be used to make clothes, string arrows, make fishing nets, and, of course, to make the first shoes. The preferred fibres were linen and hemp: the first because it grows fast, and the second because it is very strong.
Later additions included wool, which is more complicated and time-consuming to work with, and precious silk. 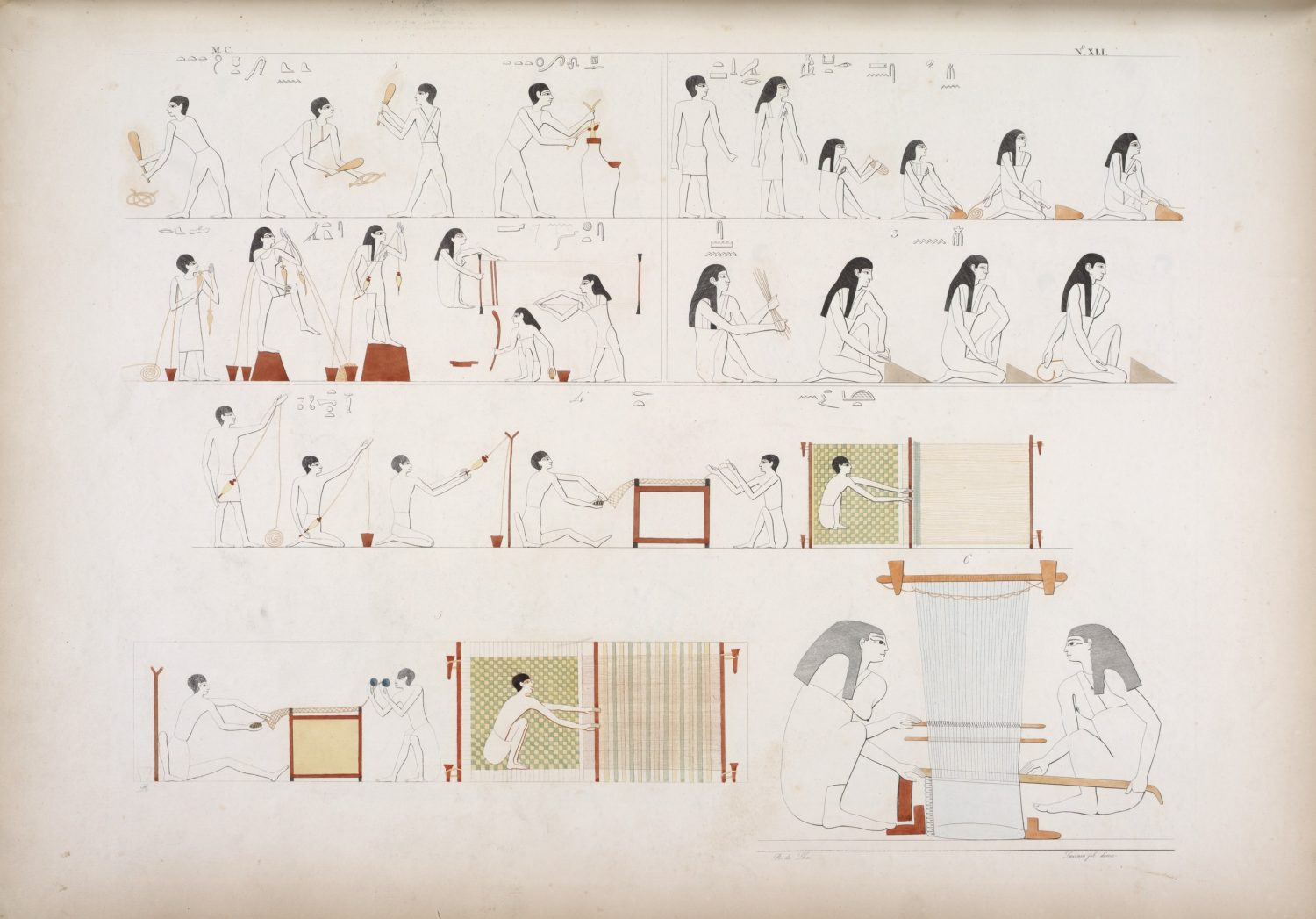 In the Ancient Egypt.
(Source: The New York Public Library)

And then there’s cotton. Already in use 5000 years ago, more flexible and more efficient to produce than linen but particularly difficult to spin and weave, for centuries cotton was considered even more valuable than silk. Use of cotton did not take over from other fibres until the industrial revolution with the invention of the flying shuttle and then the mechanical loom.

But even in the Middle Ages Italy was Europe’s most important maker of cotton fabric, thanks to the power of its trading ports, such as Genoa and Venice. Ships set off from Genoa for all over Europe laden with fustian (made with cotton and linen), a fabric much appreciated for its strength, beauty and low cost, especially in England. It was the English who came up with the name blue jeans, from bleu de Gênes, Genoa blue, to refer to the particular shade of blue of fustian from the Ligurian port city, which was used primarily to make work clothes, ships’ sails and tarpaulins, made in Nîmes, France — hence the name de Nîmes, which became denim. 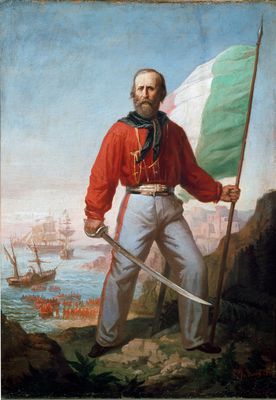 Denim played a very important role in the history of the unification of Italy. Giuseppe Garibaldi himself, as a Ligurian sailor, often wore denim.

The debate over whether it was the Italians or the French who first invented denim or jeans work clothes is still open, but they rose to popularity in the United States, particularly California, thanks to Morris Levi Strauss, a German immigrant who went to America during the gold rush of the mid-nineteenth century.

In California Levi Strauss started selling clothing for miners and gold panners made of denim. He was the first to use the two words, denim and jeans, the way we use them today: denim to refer to the fabric and jeans for the product made out of it. His trousers with reinforced pockets became so popular that other companies started making them too. 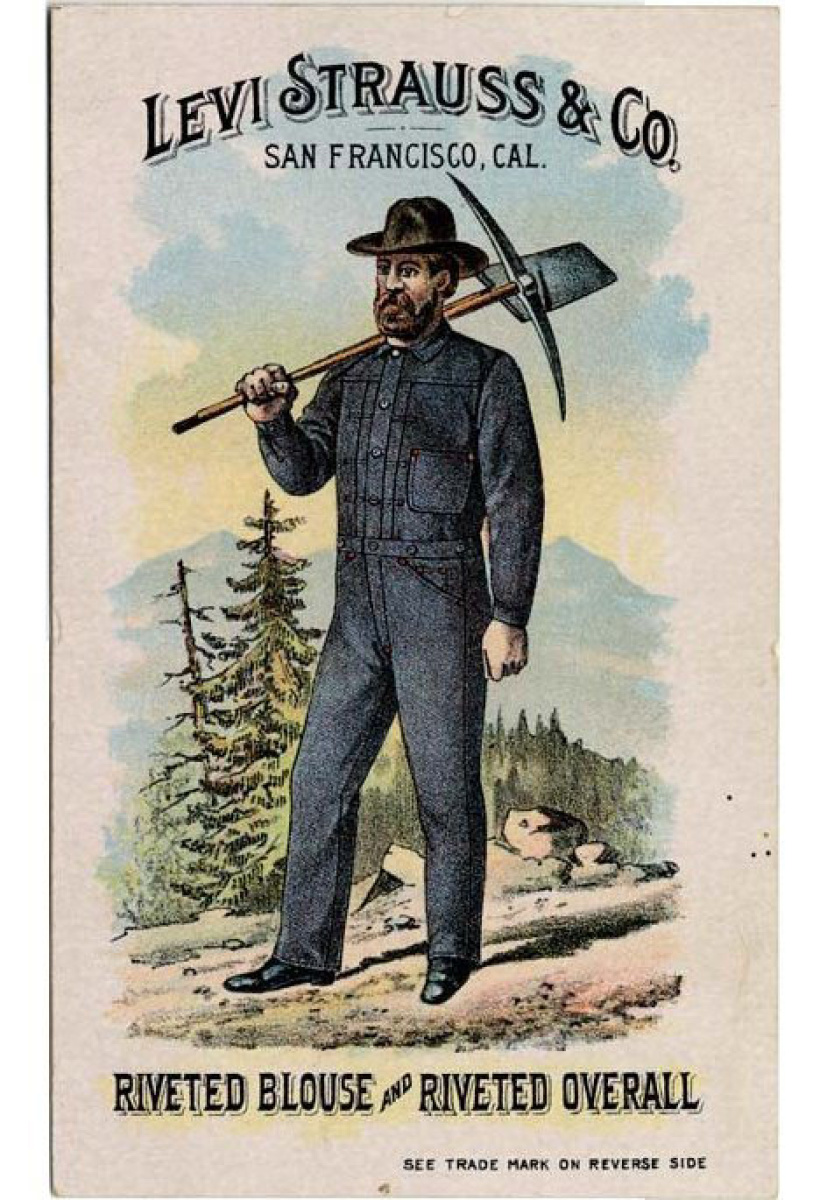 After Levi Strauss, a number of other companies also began making similar garments, such as Lee and Wrangler.

It didn’t take long for the fashion to spread from the miners of California to the cowboys of the prairies. After which denim became more and more popular. From a 1935 issue of Vogue, to the boom in Europe after the Second World War, Hollywood actors, the youth of the ‘60s and ‘70s and people all over ever since, of all nationalities, genders, religions and social classes.

No wonder Levi’s is a partner in a major exhibition entitled You Say You Want a Revolution? Records and Rebels 1966-1970, which opened on September 10, and will be open until 26 February 2017, at the Victoria & Albert Museum in London focusing on the rebellious youth culture of the day, as expressed in music, and its impact on politics, art, and, above all, the fashions of the day.

And while we’re on the topic of fashion: though it has never gone out of fashion, denim periodically comes back as the favourite fabric of fashion designers and brands all over the world, not only for clothing but for shoes, as demonstrated by several Italian brands’ new collections for next spring/summer.


Warning: Invalid argument supplied for foreach() in /home/customer/www/italianshoes.com/public_html/wp-content/themes/italia-shoes/partials/layout-gallery.php on line 14
BACK TO TOP